This page provides an overview for those who would like to learn about how language affects the traditional didgeridoo playing styles. Learning about the pronunciation in Australian Aboriginal languages is fundamental to be able to understand the ‘classical-sound’ of the didgeridoo.

At the time of colonisation in the late 18th century, Aboriginal people of Australia spoke hundreds of distinctive languages. Even though many of these languages are lost since, there are still hundreds of them spoken throughout the continent today. Across the country there is a significant effort to restore some of the lost languages, revitalise those that are considered endangered, and record spoken languages in order to teach the future generations.

Similar to spoken language, the traditional didgeridoo playing techniques use lip and tongue movements to form different sounds, many of them unique to Aboriginal languages. Etymology can help us to understand the close connection between didgeridoo playing and spoken language; for example, the word waŋa has multiple meanings: its primarily meaning is to speak, but it also means to play a didgeridoo (ŋayi yiḏaki waŋa – he plays the didgeridoo). To be able to grasp the very basics of the traditional playing styles, it is vital to learn some of the foundations of Aboriginal languages, especially orthoepy (the study of pronunciation of a particular language), phonetics (the study and classification of speech sounds) and linguistics (study of a language and its structure).

Since before colonisation the use of the traditional didgeridoo was restricted to the Northernmost part of the continent, to discuss how didgeridoo playing and language are related, below we focus on languages that are spoken in this region, in particular the Northeast corner of the Top-End. As mentioned above, Aboriginal people of Northern Australia speak hundreds of languages today, most of them are linguistically different to each other. From the early 20th century different methods had been developed by Australian linguists to understand, analyse and write down these languages. The languages spoken across Northeast Arnhem Land belong to a large group, called Yolŋu Matha (Yolŋu means people or person, Matha means tongue). The Yolŋu languages are spoken by many closely related clan groups, each of them have their own cultural and ceremonial traditions. Yolŋu Matha – similarly to other Aboriginal languages across the continent – use sounds that are different from the sounds used in English language. To be able to write these sounds down, phonemes were introduced by a pioneer linguist Beulah Lowe, who was working in Arnhem Land during the `50s and `70s. Each phoneme has a written form, made by one or two letters; to learn how to write and pronounce these phonemes is the key to be able to pronounce the Yolŋu Matha worlds. 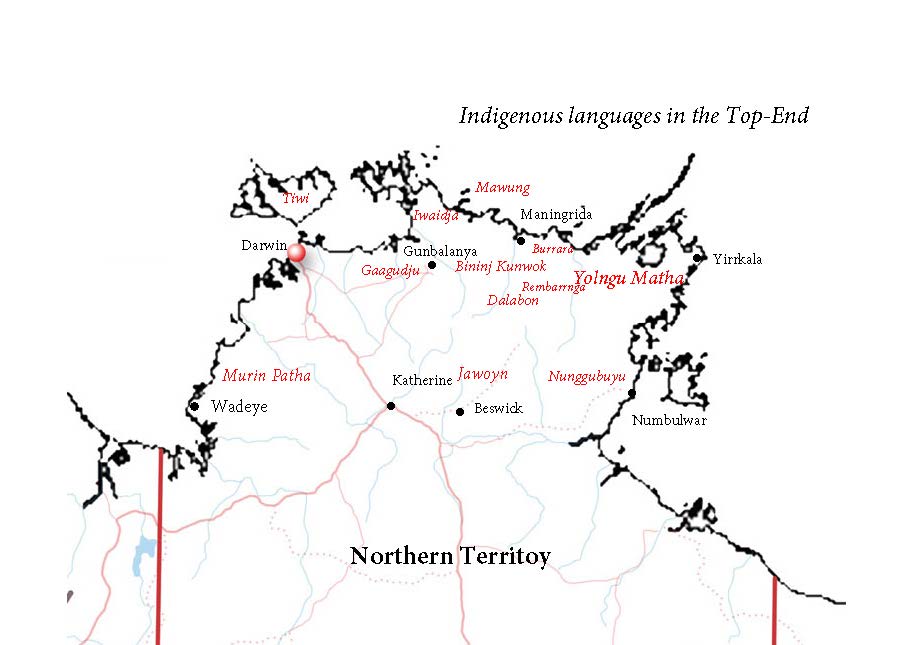 The map above indicates some of the Indigenous languages in the Top-End of the Northern Territory. Note that this map does not reflect the actual linguistic diversity of the region, the location of the languages is indication only.

The English alphabet consists of 26 letters, an average native English speaker uses 44 sounds; some of these sounds are unique to English languages.

The Yolŋu Matha alphabet consist of 31 letters, the speakers use 46 sounds, many of them are distinctive in English language.

The following list explains the pronunciation only of those Yolŋu letters and sounds that are useful for a learner of the yiḏaki playing style.

Dh dh – ‘h’ it is a silent letter as you are saying the English word`do`. Example: dhäwu – story

Retroflexed sounds – similar to the interdentals, the retroflexed sounds are important to learn while you are learning to play yiḏaki. While pronouncing this sound, the tip of the tongue turned back upwards, and its bottom touches the roof of the mouth. You might hear an `r` sound before the main consonant because of the similar tongue position between the two sounds, but do not roll the sound.

Ḏ ḏ – voiced retroflexed sound with a `d`,  you might hear an `r` sound before the `d` but do not roll the sound. Example: yiḏaki – didgeridoo, maḏayin` – sacred.

Ṉ ṉ – you might hear an `r` sound before the `n` but do not roll the sound. Example: ŋäṉḏi – mother.

Ṯ ṯ – you might hear an `r` sound before the `t` but do not roll the sound. Example: gurruṯu – kin or kinship.

Lamio-alveolar sounds – a vital tongue movement to learn in order to understand traditional rhythms and didgeridoo sounds. While saying this sound, the blade of the tongue pushed forward up, the tip of the tongue behind the bottom teeth

‘ – glottal stop. It is a voiceless sound, although as important as any other sounds in the Yolŋu languages. The airflow from the mouth is stopped by closing of the vocal cords. One of the best ways to try this sound is saying “m’m” when you are indicating “no”. The glottal stop can change the meaning of a word. Example:  goḏarr’ – morning.

For the full list of phonemes see our Resources link. 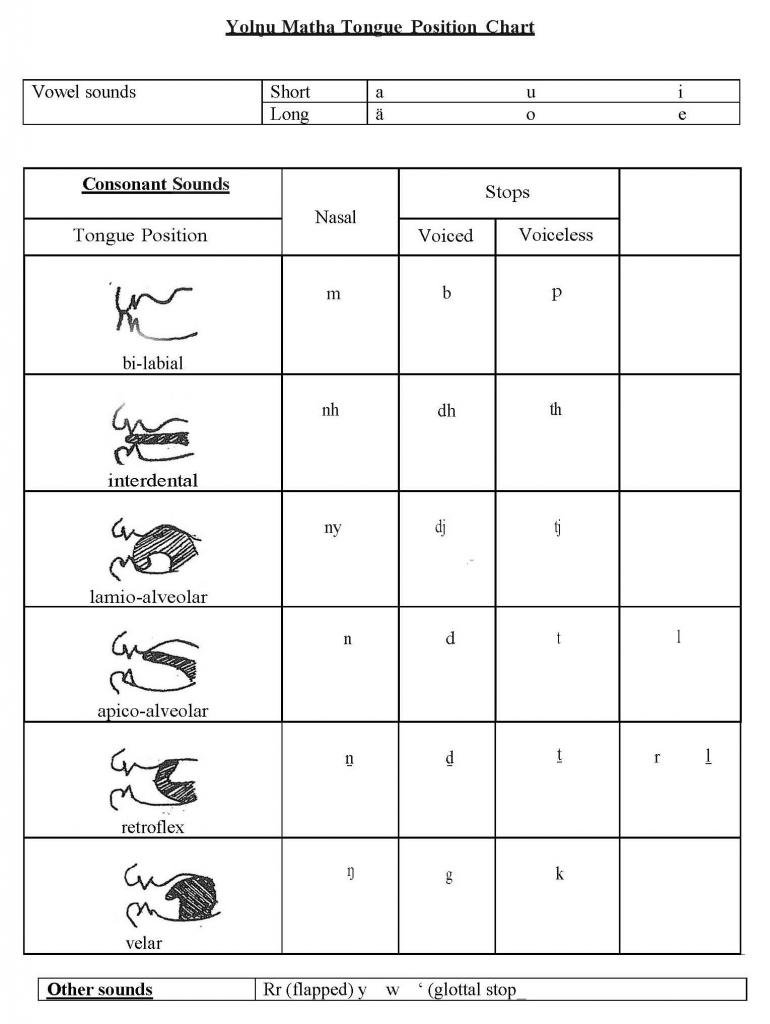 If you would like to learn more about phonetics, pronunciation and tongue positions, watch this introductory video below. Even though the video focuses on English language, it still gives a good explanation of the different tongue positions and how it affects the different sounds of spoken language. All these information is relevant when you are learning about traditional didgeridoo playing.