WARNING! This page contains voices and images of people who deceased.

We acknowledge the Traditional Owners of land, knowledges, law and languages across the Australian continent. We recognise the First Nations people of Australia as the custodians of the musical instrument known as the ‘didgeridoo’. Even though we claim copyright over this website, the information we provide on this platform belongs to Aboriginal knowledge systems, and, by no means, do we claim ownership or custodianship over this material. Our understanding of the didgeridoo and its cultural background is based on thorough research and ongoing dialogue with Aboriginal people. We are confident that we publish public information, however if any of this material raises concerns, please contact us.

For the wider public, there is limited valuable information available about the traditional didgeridoo. Resources are even more scarce if we would like to learn about how this unique musical instrument is played in West Arnhem Land. In this page, we explain some of the basic information you need to know about what the didgeridoo looks like and how it is played across the western and central parts of the Top End of Australia, and how you can differentiate it from other dideridoo-types.

This page has been reviewed in May 2022

Mako is a traditional didgeridoo-type from West Arnhem Land. The word mako (also spelt mago) is used by people from the bininj kunwok language groups, including Kune, Kunwinjku and Kuninjku, whose country spans from Gunbalanya (Oenpelli) community in the west, to the Blythe River east of Maningrida and south towards Katherine.

Due to the large speaker-base and the close kinship connections with other language speakers, the word mako is a commonly used generic name for the instrument. Indeed, the use of the word extends beyond the West Arnhem Land region as many didgeridoo enthusiasts use the term for traditional didgeridoos that are either made outside of Northeast Arnhem Land, i.e. all didgeridoos that are not yiḏaki, or traditional instruments that are cylindrical in shape and shorter in length. Such generalised use of the word can be problematic, encouraging cultural stereotyping, so when using the term it is important to be aware of its specific cultural context and meaning that extends beyond the instruments shape and size.  This generalised understanding of mako is in-line with the Western ethnomusicological categories of the didgeridoo which class mako-type instruments as the type-a musical style. Characteristics of this style are the overtone-absent drone (no toot or trumpet-sound played) and the melodic overtone, generated by the human voice, imposed over the drone. In addition, the mako-type didgeridoos tend to have open internal aperture which, combined with the use of the voice-cords of the player, provide a melodic character to its sound.

In summary, mako-type didgeridoos can be thought of as a sub-group of the generic didgeridoo, which is culturally specific to Indigenous groups from Central and West Arnhem Land, but is often used more broadly to speak of instruments from the area of northern Australia extending from West Arnhem Landin the east to the Kimberly in the west. There are many different types and shapes in this didgeridoo family, as well as different playing-styles. The mako is used as a rhythm accompaniment for songs, its sound bears melodic overtones and lacks the toot or trumpet sound. 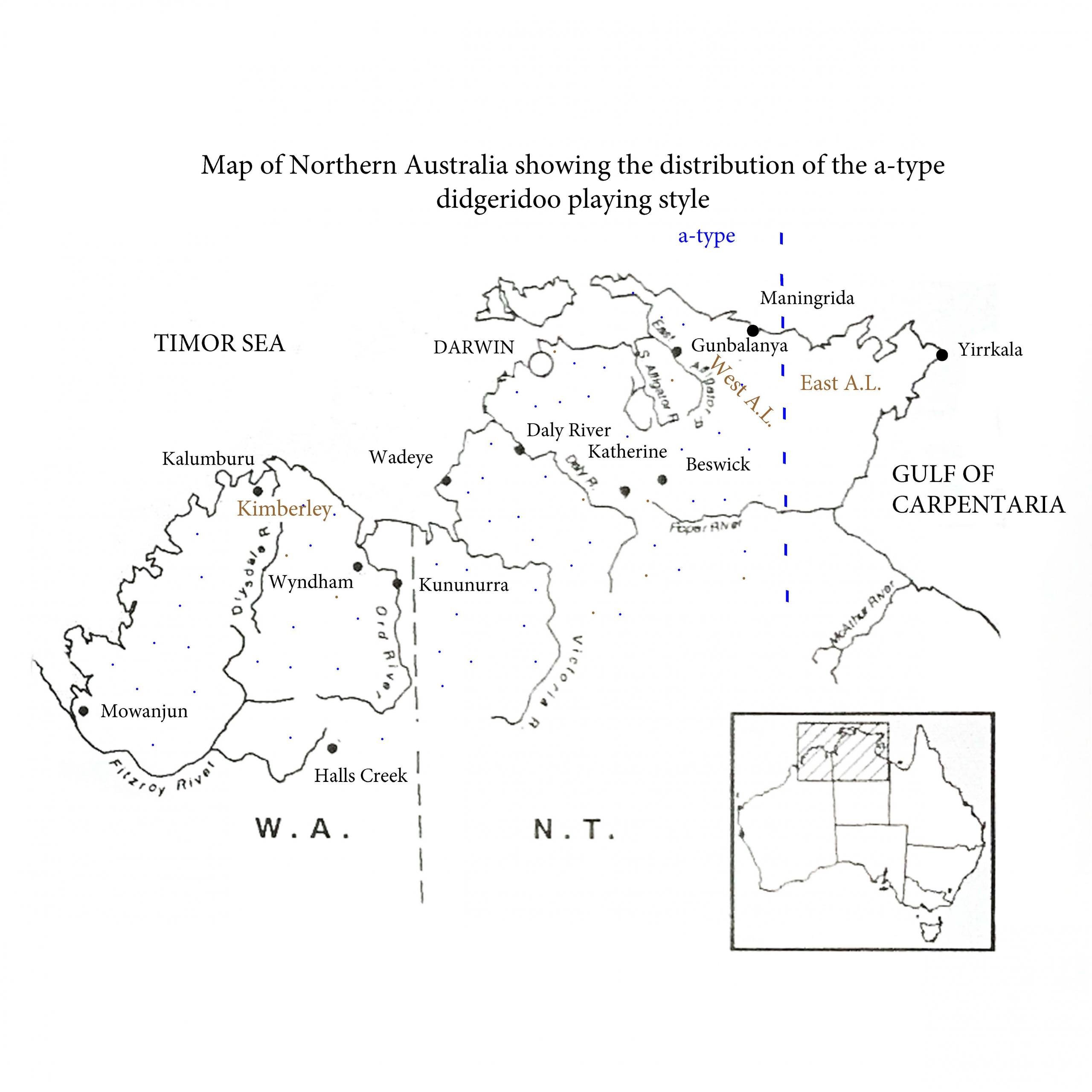 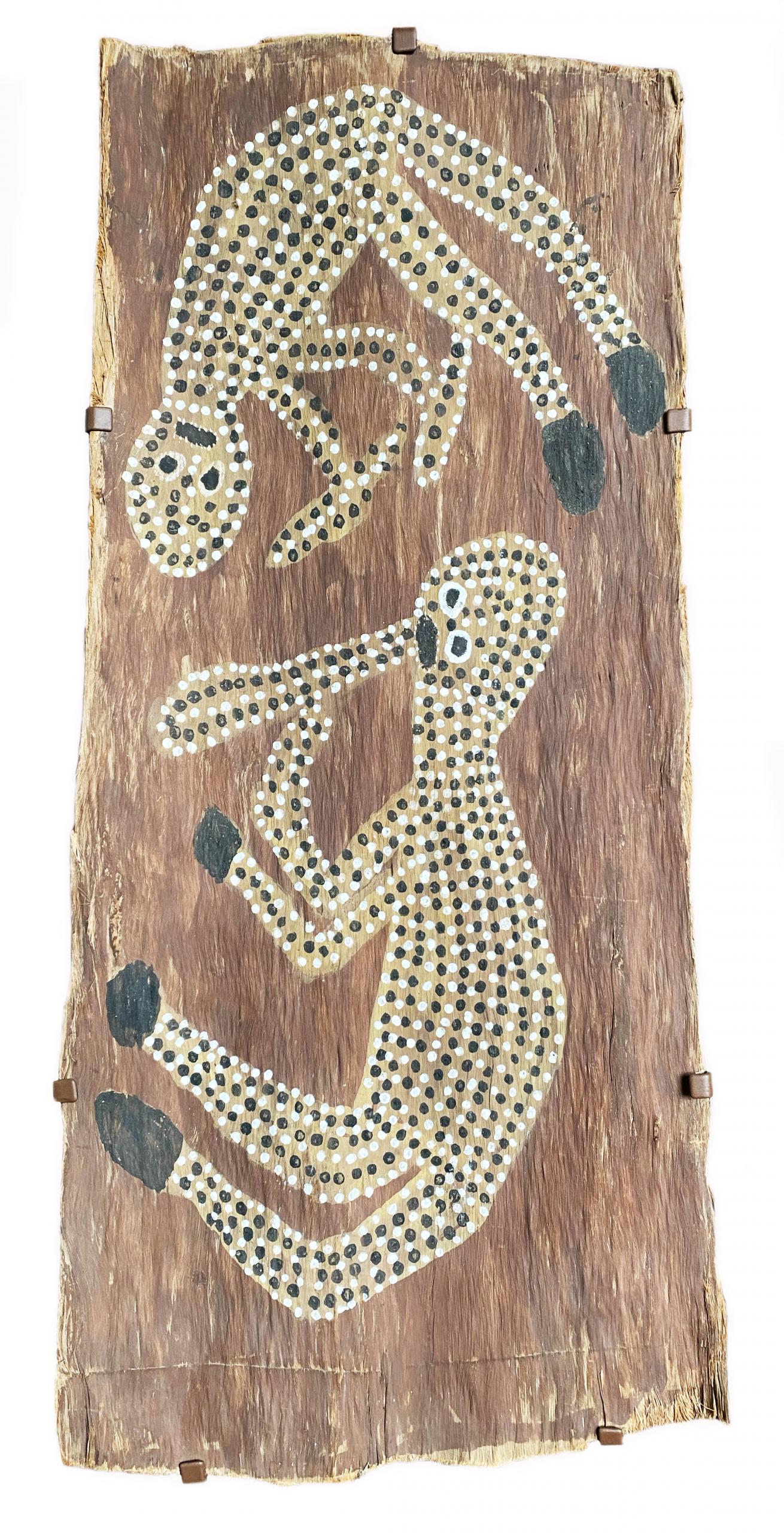 The traditional custodians of mago originate the instrument in the spiritual realms. According to their origin stories, mago was given to them by the Mimih, the specific powerful spirit beings who often make contact with the living and pass on knowledge to them. There are several accounts of senior song and lawmen receiving songs, law or important instructions from the spirit word, that is general across the region. As a senior lawman Alan Maralung explained about a song series he recorded in 1988 (1993), he was visited by two spirit beings, one of them taught him the songs, the other the didgeridoo accompaniment. Since the spirits approach individuals to pass on knowledge, these information – wether it is a song or didgeridoo accompaniment – are individually owned and inherited through kin. As musicologist Allan Marret observed (1993), this specific feature of the songs do not leave room for much improvisation, while, for example, in Northeast Arnhem Land, songs are owned by clans, and the songmen have more flexibility in terms of individual style and improvisation during the performance.

Original site for the didgeridoo?

As we mentioned elsewhere, old paintings on the walls of rock shelters across West Arnhem Land informed the way the modern mainstream culture recognise the authenticity of the practice of didgeridoo playing. Sites at Ubirr in the Kakadu National Park, and then other sites nearby across the South Alligator River around Gunbalanya depict mago players; some of these paintings are around 1500 years old – therefore these are the oldest known record of didgeridoo players. Nevertheless, the area of our current interest is the current oldest known sites of the instrument.

Perhaps nobody knows where exactly the first didgeridoo was played, but some other suggestions might lead us to Western, and Northwest Arnhem Land. During our consultations in Arnhem Land between 2017 and 2021, several Indigenous elders pointed to the area north of the above-mentioned rock paintings, namely Goulburn and Croker Island; during personal conversations with senior Gupapuyŋu elder Dhulumburrk Gaykamaŋu (dec.), we were told that originally the didgeridoo belongs to the Maung, the traditional owners of Goulburn Island and the adjacent mainland. Our countless conversations with senior yiḏaki-boss Djalu’ Gurruwiwi (dec.) focused on a didgeridoo type that he was responsible for, called Djuŋgirriny’; as Djalu’ explained, through songlines, it is connected to Goulburne Island (read more here). During our fieldtrips to Croker Island in 2017 and 2018, Iwaidja artawirr (the Iwaidja name for mago) players Jimmy Cooper and Ian Yarmirr talked about a local sacred instrument, located in the bush near Minjilang community, and according to their accounts it is linked to the neighbouring Goulburn Island. Even though these conversations cannot lead us to any conclusions about the origin of the didgeridoo, they show us some interesting correlations between different independent views amongst Indigenous people across the region.

As we mentioned above, the generic term of mago covers many different type of instruments. Traditional didgeridoos constructed – or designed – to produce specific sound to fit the tone of the song and the songmen, and shaped to make it suitable for the playing-style. Across the regions where the mago-style instruments are played, there is a tendency to name the didgeridoo playing-style after the performance-style; generally, the performance incorporates the song, the singing and dancing-style, and the didgeridoo itself.

We can distinguish two main mago-playing styles, that is based on modern research on the traditional ceremonial performance-styles (Ellin & Jones, 1953). We believe however, that further research into this topic is needed to in-depth examine the richness of the tradition of didgeridoo-playing in the West-Arnhem, Daly and Kimberley regions. Please note, that the sound samples below are examples only, that do not showcase all varieties of the traditional styles.

Gunborrk performance from Southwest and Central Arnhem Land. “A famed song series composed by Bangardi Djoli Laiwanga OAM from Wugularr, Norther Territory. Leading Australian contemporary artists Kamarrang Bob Burruwal and Kodjdjan Lena Yarinkura staged a performance at their outstation, Ankabadbirri recreating an event where Laiwanga was buried alive by Wyarra (devil spirits). He was surround by sorcery spikes under a shelter while the Wyarra performed song and dance. While he was buried he heard the mako (didjeridu) and felt the vibration of the dancers feet hitting the ground. Laiwanga managed to escape and leap out of where he had been buried alive and the Wyarra asked him which of the performances he enjoyed the most. These songs became a series of Kunborrk style songs performed for Bongolinjbongolinj.” Source and video credit: Maningrida Arts and Culture

Extract from Track 5, Songs from the Northern Territory 1: Music from Western Arnhem Land Notes from the collector: “Oenpelli 1962. Frank Gananggu talks about some of the … didjeridu accompaniments. A free translation of his Gunwinggu comments is as follows: In the didjeridu accompaniment … the player says: didjemro, didjemro, etc.; … didjeramo-rebo, didjeramo-rebo” Moyle, A. M. (Collector). (1997). Songs from the Northern Territory 1: Music from West Arnhem Land [CD]. Australia: Australian Institute of Aboriginal Studies.

A few characteristics of the mago and its sound

We will not attempt to present an in-depth explanation of the basics of the mago playing style on this website. Playing the didgeridoo requires time and effort, but equally, since traditional didgeridoo-playing is part of the Indigenous system of knowledge, anyone who wish to learn about it needs to seek information directly from knowledge holders.

On a general note however, it is possible to highlight some of the characteristics of the playing-style. Perhaps a comparison with the yiḏaki-style – the other major playing style of Arnhem Land – might be useful to gain some basic understanding in how the mago is played. As we mentioned above and elsewhere, the mago-style is described as type-a, overtone absent didgeridoo playing style. Basically this means, that traditional players do not play the trumpet sound on mago (i.e. during the trumpet sound the air blown through tights lips). Due to the lack of the use of the trumpet sound – also called overtone -, the overall characteristics of the rhythms are significantly different; to better understand the role of the trumpet sound, read our article on the yiḏaki-style.

Another basic feature of the mago style is the melodic flavour of the sound. Even though both traditional didgeridoo playing styles use human voice that fills the drone with overtones and creates rich acoustics, perhaps this aspect is more prominent in the sound of the mago. In some of the instances this feature is more extrusive than in others, and – depending on the acoustics of the instrument – can be noted as an ‘electric’ tone over-impose the drone within the rhythm. Listen to a playing-style comparison below accompanied by mouth-sounds: the first example is the melodic mago-style (type-a), the second is the overtone-present yiḏaki style (type-b) (extract from track 13 on Moyle, A. M. (Collector). (1978). Aboriginal sound instruments [CD]. Australia: Australian Institute of Aboriginal Studies).

As we discuss in another article, the foundation of the didgeridoo playing embedded in language. The traditional sound of the didgeridoo – and the rhythms – are largely formed by the same tongue movements as the spoken language, therefore understanding the basics of the phonetics is an important part of learning about the didgeridoo. While type-b playing style focuses on strong and straight tongue movements with interdental and retroflexed sounds, the type-a style uses the tongue in a more relaxed way; instead of putting the focus at the tip of the tongue, it uses flat tongue positions and slow, backwards tongue movements from lamio-alveolar and apico-alveolar tongue positions (to understand more about these styles, see the tongue position chart). This particular feature – pulling the tongue from the front of the mouth towards the back while filling the sound with resonant, melodic tones generated by the vocal cords – is explained by calling it ‘pulling’ (Elkin, 1953). Even though the concept of pulling is a Western way of explaining the technique, it lays at the foundation at the sound of the mago.

Yiḏaki – traditional didgeridoo from the land of Northeast Arnhem

Case studies and essays about the didgeridoo

Collection of links to further websites

contact us for individual or group workshops or presentations